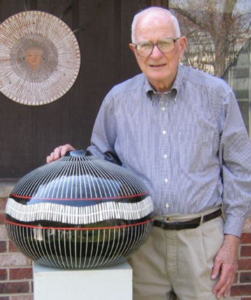 As a child Jack was nurtured in an ambiance of art and craft.  His dad was an architect specializing in homes.  He had two talented older brothers.  Philip became a museum mammalogist, but sadly died much too young.  Edward became an award winning Atlanta architect and a world renowned wood turner.  Major museums in the USA have Ed’s superb wooden vessels.  Jack had a career in large electric motors that overlapped with study and practice in ceramic art.

Jack’s huge ceramic vessels are sought for the aesthetic value of their well-rounded curves in forms of ellipsoids, globes and ovoids.  Their volumetric scale maximizes surface area thus enlarging opportunity for pattern.  Think of them as architectural accent energizers.

To create a vessel Jack used 30 to 40 lbs of clay slabs to form a large cylinder. Which was closed at the bottom and with a hand opening at the top.  He would then use a paddle on the outside backed by an anvil held inside. From there he expands, forms, and refines the shape.  Necking, drying, firing, patterning, glazing and re-firing follow.  The process requires some unique tools and devices.  The weight of a completed piece will be in the 18 to 24 lb range. His earlier work captured the essence of pre-Columbian pots (PC Aura). The pots have décor associated with Mayan, Peruvian, Aztec, and southwestern native art.  Now his pieces are contemporary with a variety of form, color and design.

National and local competitions have included his pieces with awards.  Galleries in Atlanta, Santa Fe, Sedona, San Francisco and others have or have had his creations.

We have all 3 of these for sale! Stop up at the Gallery to check them out!